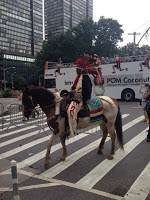 Friday, 9 August 2013, was the International Day of the World’s Indigenous Peoples. This important day was recognized at United Nations headquarters in New York, where Indigenous peoples from around the world gathered for a special event with the theme “Indigenous peoples building alliances: Honouring treaties, agreements and other constructive arrangements.” Prior to the start of the special event, hundreds of indigenous and non-indigenous rowers arrived several blocks north of UN Headquarters in Manhattan, after having collectively travelled thousands of miles on rivers and horseback to honour the first treaty -– the Two Row Wampum -– concluded between Dutch immigrants and the Haudenosaunee (a confederacy of six nations, with capital in the Onondaga nation, in NY State) 400 years ago, in 1613. 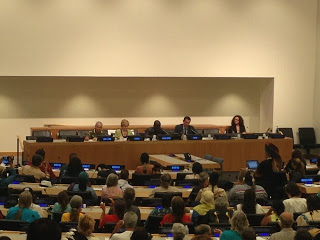 The special event was chaired by Paul Kanyinke Sena, Chair of the UNPFII, who moderated a panel made up of Mary Morgan Moss, Ambassador, Deputy Permanent Representative of Panama to the UN; Ivan Šimonović  UN Assistant Secretary-General for Human RIghts, and Chief Oren Lyons of the Onandaga people. Also attending was UN Secretary General Ban Ki-moon, who spoke of the importance of honoring treaties between States and Indigenous peoples. He noted that while Indigenous people had made it clear that they want development, such development must “take into account culture, and identity and the right to define their own priorities.” He stated that “the post-2015 development agenda needs, therefore, to incorporate the rights, perspectives and needs of Indigenous peoples” and “urged member states to take concrete steps to address the challenges facing Indigenous peoples, especially their marginalization and exclusion, by honoring all commitments and examining what more can be done.”

Mr. Šimonović highlighted four key messages that should help narrow the gap between the promises made in treaties and the realities on the ground: first, we must ensure that there are effective remedies available in cases of violations of treaties, in particular when they involve human rights issues; second, UN and regional mechanisms should pay increasing attention to treaty observance, and those involved in the implementation of treaties should engage with human rights bodies when human rights issues are at stake; third, while it is crucial that we monitor and address violations, we should also identify and learn from situations where compliance with treaty obligations has been achieved; and fourth, as the need for compliance with existing treaties is stressed, we should also pay attention to the ongoing work in many states to draw up new treaties in order to ensure that their eventual content is fully in line with the rights of Indigenous peoples. He noted that we should start by ensuring a process that is fully in line with the principle of free, prior and informed consent and other human rights principles. (Note: all uses of the pronoun “we” by Mr. Šimonović.)

J. Eli Makagon from Natural Justice attended this event.
More information on the International Day can be found here.
Subscribe to NATURAL JUSTICE by Email