Roads to Justice: the impacts of road construction in northern Kenya

By Rose Birgen and Gino Cocchiaro

“The control man has secured over nature has far outrun his control over himself.” – Ernest Jones, The Life and Work of Sigmund Freud, 1953

In East Africa, Kenya is considered a new frontier for business and development – hence the term “engine” of the region (David 2015). Since the country adopted its Vision 2030 strategy, emphasis has been placed on trade, industrial expansion and infrastructure development, with the aim of not only providing a stable economic environment but also transforming and solidifying the country as a middle-income economy (Kenya’s Vision 2030). To realize this goal, there has been consistent budget allocation and foreign investment into the country’s infrastructure development and growth, which has transitioned Kenya into the current explosive era of infrastructure expansion (Laurance 2016). The recent budget allocation, including external financing, gives a total of Kshs 117.6 billion – approximately USD 1.17 billion (Budget statement Fiscal year 2016/2017). But it is the transport routes, particularly roads, which have been identified as critical to maintain and expand this new frontier (Kenya’s Vision 2030 MTP2 2013-2017). The A2 Road Project, designed to bitumenize the 505km stretch of unpaved road from Merrile River, in central Kenya, to the Kenyan-Ethiopia border town of Moyale, fits well into this narrative.

It is hoped that by October 2016, the road construction will open the country’s undeveloped northern region to much yearned economic development (Marsabit CIDP 2013-2017). A region marginalised socially, economically and politically with the aide of colonial policies, some of which have continued well after independence. Pastoralism continues to be the the most productive and prominent livelihood in the region with livestock (cows, goats, and camels) being kept through a well regulated traditional system of grazing (CIDP 2013-2017). Since water is scarce, the community has designated water points, albeit limited, in different areas that are able to support both residents and their livestock (CIDP 2013-2017). Given the precarious nature of the environment and the importance of pastoralism, it is only sensical that any development project should strengthen these livelihood mechanisms. Therefore, we must be cognizant of the benefits and potential negative impacts that roads, such as the one in Northern Kenya, may bring (Laurance 2015).

Fortunately, Kenyan law is not oblivous to the potential impacts such a development project can have on people and their environments. Kenya’s Constitution inscribes a fundamental right to a clean and healthy environment for all people, and for the benefit of future generations. The Environmental Management and Coordination Act (EMCA), the framework environmental law of Kenya, empowers citizens to participate in environmental processes as well as minimising and mitigating environmental damage. EMCA also stipulates that Environmental Impact Assessments (EIA), a participatory process of assessing potential environmental impacts of projects (Clayton & Sadler 2004), must occur prior to the commencement of projects. If approved, the EIA results in the issuance of an environmental license, which sets out numerous conditions to mitigate social and environmental impacts (Section 63 EMCA; excerpts from Kohli & Menon 2009).

Consistent with national law, an EIA study on the road was conducted and a report filed with Kenya’s chief environmental regulator, the National Environmental Management Authority (NEMA) in 2009 (A2 Road EIA 2009). In 2011, an environmental license to conduct the project under certain conditions was issued to the Kenya National Highways Authority (KeNHA), the project’s proponent (EIA/447). KeNHA then contracted two China-based companies (China Wu Yi and Jiangxi Zhongmei Engineering Construction Limited) and one based in Turkey (Gulsan Holding) to carry out the construction. 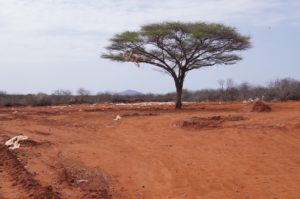 Culverts and bridges have been poorly designed or constructed leaving surrounding areas and homes prone to floods resulting in the loss of human life and livestock. In other areas, constructed bridges have blocked community dams that were a collecting point downhill hence limiting accessibility of water for livestock and domestic use in these areas. Excavated materials have been disposed alongside the road blocking access routes for animals and residents to water points and grazing fields.

The excavation for the road has also resulted in unregulated clearing of vegetation, damaged existing livestock water pans and exposed borrow pits – the latter two resulting in human and livestock death and injury as reported by the people living in the area. Plastic bags used for construction have either not been disposed of or only partially burnt – a concern for pastoralists who believe livestock have died as a result of consuming this litter. Community water dams have been polluted and water tables disrupted leaving the community with insufficient water supplies, or no water all together, forcing them to walk long distances to access other water points. There has been direct physical displacement and dispossession without adequate compensation and a failure to adequately address dust storms from quarry sites.

All of these impacts are considered within the EIA study, environmental management plan, environmental license or national laws and, hence, should have been adequately dealt with. So, why is it that these impacts have occurred? Some of the reasons that must be explored relate to: the limited amount of monitoring that occurs during projects; vaguely drafted environmental license conditions, which are difficult to implement and monitor like ‘all waste water is disposed as per the standards set out in then Water Quality Regulation’ (Condition 3.1; Kohli and Menon 2009); and poor and ineffective response from relevant government agencies. Further, a disempowered citizenry, who don’t know the law nor mechanism to access systems of justice, are unable to exert the necessary pressure to hold the relevant government bodies and project actors accountable.

We have much work to do to improve the implementation of our laws but it is unwise to apportion blame to one group, given the real challenges that exist with funding and capacity of government agencies. As a starting point, we all must inherently accept that the rule of law, as a fundamental pillar of a democratic society, is completely fused to our plans for development because the law is not there to deprive us of a prosperous nation but to protect and enliven that which we, as Kenyan’s, hold dear. 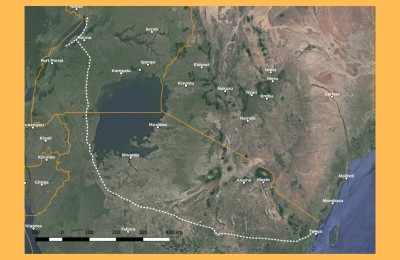