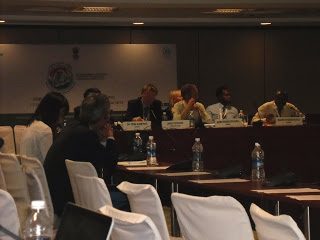 India, Japan, Germany and South Africa were among the countries that shared their experiences on ABS. Germany said they had several ABS programmes in place, including the work of the ABS Capacity Development Initiative to assist developing countries with the implementation challenges. South Africa was applauded by the gathering when it announced that it would be ratifying the Protocol next Tuesday, and Norway indicated that they would ratify the Protocol within the next six months.
In summary, the main observations of the panel included:
In his concluding remarks, the Ethiopian Minister of Agriculture, Mr Getahun, said many of the reasons submitted by Parties for not ratifying the Protocol were related to preparatory processes leading up to ratification. These reasons should not hinder ratification. He said that effective implementation starts with ratifying the Protocol despite the preparatory challenges (because activities cannot be classified as legal or illegal if the Protocol is not ratified), making communities aware of the importance of their biodiversity resources and their rights as an informed public will assist in combating biopiracy, and finally, by establishing effective check points.