In early August, Natural Justice participated in the 2013 Global Environments Summer Academy (GESA) on socio-ecological interactions that brought together eighteen young environmental change-makers from around the world and from a myriad of sectors, professions and disciplines. Most participants have extensive experience in working with indigenous and local communities. 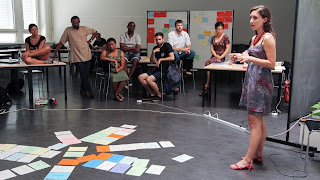 Marie Wilke from Natural Justice and a GESA alumni lead a three-day workshop on “Law, Policy & Advocacy”. The aim of the course was to equip the participants with the tools needed to proactively engage with international, regional and domestic law-making and shaping processes. Through interactive group work, case studies and moot courts the course aimed at making law available to non-lawyers and to introduce useful approaches for engaging in legislative and adjudicative processes.

During the first day the participants produced small universes of international law by ordering different international organizations, laws, courts and actors that they were familiar with according to themes, legal subjects and hierarchies.
These systems informed the group work on day two, when the participants developed legal strategies for three fictional indigenous and local communities that were confronted with challenging policy changes such as large-scale infrastructure projects, prohibitions of customary practices for conservation and animal welfare reasons, and land right reforms and competing land claims. Some groups opted for court action in the light of recent jurisprudential developments, in particular in regional human right courts, while others preferred negotiated settlements. Importantly, using Natural Justice’s Toolkit, all groups found that bio-cultural community protocols were useful tools for jointly developing legal strategies with the communities.
On day three the GESA participants argued a fictional case before the International Court of Justice (ICJ). The Moot Court case developed by the International Law Student Association (ILSA) concerned a small island nation that lost it’s homeland due to rising sea levels and that now struggles to find a new land and appropriate shelter for it’s climate refugees. The participants developed important legal arguments on the status of climate refugees, the collective responsibility for climate change, and on responsible developing lending. The diverse backgrounds of the participants were definitely of great help as all suggested approaches were informed by the perspectives of non-lawyers.
In a final discussion the participants agreed that international law yields many (unforeseen) opportunities for disadvantaged groups and that there is ample space for engagement, but that the biggest challenge remains the inaccessibility of law for non-lawyers.

Seminars: Involvement of Indigenous peoples and local communities in Access and Benefit Sharing