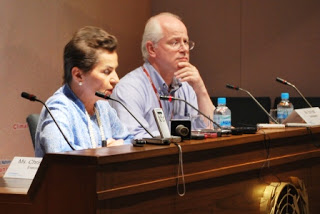 Christiana Figueres, Executive Secretary of the UNFCCC, spoke to the press on the final day of Ad Hoc Working Group negotiations in Bangkok. According to Figueres, there is no country that is fundamentally opposed to a second commitment period of the Kyoto Protocol, though “whether they individually intend to participate is another issue”. (Japan, for example, refuses to sign onto further commitments if the US and China do not do the same.) She said that while talks in Bangkok have taken longer than hoped and discussions have not been easy, Parties have demonstrated dedication, commitment, and seriousness about engaging with the process.

She noted that Cancun was a major step forward, but that it did not solve the broader problems. Echoing the main argument of developing countries, she emphasized the need to keep issues of the Bali Action Plan that were not agreed on in Cancun on the table. She referred to agriculture and maritime and aviation emissions in particular as “small font” issues unresolved in Cancun, while global goals, emissions peaking, and the legal nature of the next chapter of the climate regime are considered the “big font” issues still to be decided.

In terms of next steps, Ms. Figueres expects there to be several ministerials, likely in Germany, Mexico, and South Africa, this year ahead of COP17 in Durban. In response to critical questions from reporters, she acknowledged that it is up to each Party to decide the best path for domestic implementation of international agreements. She also lauded the Convention for being the only process in the world that allows for every single country, especially the most vulnerable ones, to participate in making international decisions on climate change. Noting the importance of international treaties to confer both rights and obligations upon its member states, she pointed out that the Kyoto Protocol provides a certain sense of predictability, certainty, and timing through setting clear targets, timelines, and compliance mechanisms. Indicating that something like this needs to be the operating backbone of the next climate regime, it is “clearly not where we are now”, as Parties attempt to determine if a domestically-driven approach will be enough to meet the 2 degrees Celsius target for global temperature rise.

Daily coverage of the negotiations is provided by IISD-Reporting Services. Video interviews from Bangkok can be accessed at Climate Change TV.