The Two Worlds of Nagoya: New publication by Natural Justice and Public Eye

Discrepancies in implementing the Nagoya Protocol have consequences for access and benefit sharing. 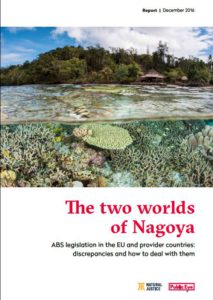 A new report, published by Public Eye and Natural Justice, shows the large discrepancies between the EU ABS framework and emerging provider country laws in how they implement the Nagoya Protocol, and the consequences for access and benefit sharing.

The study will be presented at a side event during the 13th Conference of the Parties of the Convention on Biological Diversity in Cancún, Mexico on Wednesday 14 December 2016 at 18:15 in Side-event Room 2, Universal building.

It focuses on three issues:

The EU Regulation takes the position that benefit sharing obligations are triggered by the physical access to a genetic resource (GR) or associated traditional knowledge (aTK) in the country of origin, and limits the obligations of users of GRs and aTK to uses of resources that have been accessed in provider countries after the Nagoya Protocol has been ratified by both the EU and the country of origin. This is in contrast with the understanding of most, if not all, provider countries, whose legislations consider that benefit sharing should be triggered by the utilization of GR and aTK. This should include any new utilization of GR and aTK after the entry into force of the Nagoya Protocol or the national ABS law of the provider country, even if the physical access took place before (as is the case with the majority of GR and aTK held in ex-situ collections, for instance).

A significant gap in the EU regulation exists because it requires due diligence only from users of GR and aTK within the EU – not from parties selling or otherwise commercially profiting from products based on GR and aTK which were developed outside of the EU and then imported.

The study argues that these discrepancies between the EU regulation and provider country legislations will lead to legal uncertainty for providers and users alike. This in turn, if solutions are not found, could lead to more restrictive access measures by provider countries. It goes on to propose potential measures that can be taken by various actors to maintain the spirit of the CBD and the Nagoya Protocol, fulfil the rights of provider countries and of indigenous peoples and local communities, and achieve fair and equitable benefit sharing.