Progress on the Lamu Community Protocol 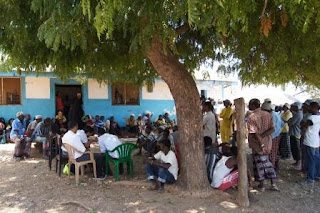 Gino Cocchiaro and Kabir Bavikatte (Natural Justice) were in Lamu, Kenya, last week to assist the communities there in their development of a biocultural community protocol (BCP). The Indigenous communities of Lamu, which include communities of hunter-gatherers, fisher-folk, pastoralists, and farmers, are extremely concerned about the proposed construction of a deep-sea port within the Lamu District. The 16-billion dollar development would include a deep-sea port, railway, oil refinery, international airport, resort city, and major highway.

The Lamu District, which includes the Lamu Archipelago, is an incredibly diverse and rich area. The Indigenous communities are reported to have been in this area for over 1,000 years and Lamu Town can be traced back to the early days of Islamic culture in the 7th century. The town and nearby islands are dotted with incredible archeological sites, which have given rise to the town being declared a UNESCO World Heritage site. The communities of the District are dependant on fishing and farming for their livelihoods, with many continuing to practice traditional ways of life, including hunting and gathering. Lamu, which was declared a UNESCO Man and Biosphere Reserve in 1980, is also home to rare marine species such as sea turtles, sharks, and dugongs, and also hosts two national reserves: the Kiunga Marine Reserve and Dodori National Reserve. The wider port area would cover all of these reserves.

The development of the BCP is being co-ordinated by a BCP Committee made up of representatives from each of the Indigenous groups, women, youth, and religious and environmental groups. The committee has been visiting each of the villages in the area to listen to and document their concerns regarding the port development and other related issues that the development could potentially exacerbate. One such issue is the continued loss of land that the communities continue to suffer. Given the majority of land in Lamu is Government land with no recognition of customary title, the recent announcements of the port development has led to an increase in land speculation, marginalizing the communities even further.

The communities wish to utilize their BCP to actively engage with the Government and other relevant stakeholders to seek information on the port development, of which they have very little, and to be involved in adequate consultation regarding its potential development.

During the visit to Kenya, Natural Justice also met with representatives of the UNESCO Man and Biosphere Reserve Committee to discuss the port development. Through the discussions, UNESCO advised that they were seeking, with the National Museums of Kenya, to co-ordinate a multi-stakeholder meeting on the port issue.