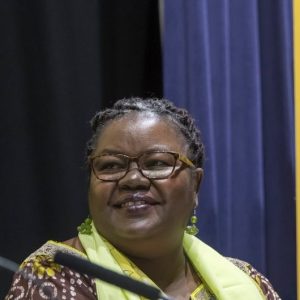 Njoki Njoroge Njehû joined the board of Natural Justice in 2019. Ms. Njehû is a committed grassroots organizer/mobilizer and activist. Her first activism and advocacy lessons were from her mother, Lilian Njehû, a community and church-based activist who continues to inspire her to fight for justice.

She is co-founder & Executive Director of Daughters of Mumbi Global Resource Center, an independent non-ethnic, non-partisan Nairobi-based network. Previously she was Director of the 50 Years Is Enough: U.S. Network for Global Economic Justice and before that worked for Greenpeace International. She has testified three (3) times before the U.S. Congress, on debt, HIV/AIDS and other crises facing Africa.

Ms. Njehû has been profiled and quoted in print and broadcast media, including: Time Magazine, The Daily Nation (Kenya), The Financial Times (U.K), The New York Times, The Sankei Shimbun (Japan), The Washington Post, Ode Magazine (Netherlands), and on KBC TV (Kenya).