In September 2022, Natural Justice convened the first regional reflection meeting that brought together African environmental defenders, including women and youth, from 19 African states, alongside other key environmental, land and human rights defenders’ stakeholders.  As noted in the remarks by the United Nations Special Rapporteur on the situation of human rights defenders during the opening remarks, the meeting occurred at a defining time, nearly a quarter of a century since the UN Human Rights Declaration was issued, and as the region faces key environmental justice challenges.

The meeting created a safe space for the African defenders to share and reflect on their struggles and celebrate their milestones. Additionally, they sought peer-to-peer inspiration, strength, encouragement, motivation, and healing. Beyond that, it was an opportunity to build capacity, strengthen solidarity networks and connections, as well as strategize around collective commitments and demands.

The majority of the defenders highlighted their contribution towards addressing the triple planetary crisis of climate change, pollution, and biodiversity loss. These crises are exacerbated by large-scale and unsustainable extractive, infrastructural and conservation projects in their territories of life, negatively impacting their livelihoods and culture.

African defenders grapple with the dynamics of shrinking civic spaces and cases of threats, stigmatization, harassment, increased surveillance, arbitrary arrest, detention, criminal charges, unfair trials, criminal conviction, and murder, which are on the rise with the proliferation of investments and developments.

Their civic rights have been frustrated through the elite police deployment, and in some cases using stigmatization and deliberately painting of defenders an opportunists or criminals. Observably, the perpetrators of these gross violations across countries in the region are: governments, private (international) companies, paramilitary militias, criminal gangs and bandits, vigilantes, and extremist organizations. Defenders shared accounts of personal experiences of threats and systemic issues, as well as instances where the defender’s crucial voices were ignored, suppressed and forcefully silenced.

Clearly, the defenders’ systemic frustrations emanate from historical negligence when it comes to explaining their role and mandate. Additionally, governments across the region have continued to create laws and frameworks, as well as impose strategies, that frustrate and limit civic participation and litigation.

Women defenders, specifically, emphasized that it was twice as hard being frontline defenders compared to their male counterparts. African women defenders face gross violations of their rights, insecurities, and adverse violence due to their gender. This is tied to dominant patriarchal cultures and violence against women. Additionally, women defenders reflected that the legal system is structured in a non-inclusive manner which prevents them from easily maneuvering through it. Consequently, the justice system and what it means to women and feminist defenders, is an issue that has not been clearly understood.

Young defenders, on the other hand, stated that while they are at the forefront of the struggles and are the most susceptible to long-term harm from violations of environmental rights, they are often locked out of meaningful involvement in strategy development and decision-making, with total disregard for the fresh impetus they bring. As a result of these dynamics, young women defenders face double marginalisation by virtue of age and gender. In this case, the issue of intersectionality is crucial, and actors should start looking at defenders’ issues holistically and in an integrated manner.

Reporting on Africa’s defenders is marred by critical limitations, including but not limited to; under-reporting, un-documentation, and under-documentation, as well as suppressions by powerful actors. In other cases, rural-based defenders are targeted in invisible spaces where information is not traditionally collected. Lack of information on these occurrences diminishes the voice of defenders. Missing facts and evidence frustrate attempts to lobby for their protection.

In their interactions with various United Nations and African Union processes, defenders protested the significant exclusion of their voices, demanding inclusion in key decision-making and accessibility of the processes. They committed to proactively link the local relations to the global level and consider their long-term engagement in multi-lateral processes.

Reflecting on the mental, psychosocial, and psychological aspects of environmental rights activism, the defenders underscored that they have a powerful passion and purpose. The heavy duty of defending rights must be critically considered, in ensuring resilience-building and protection of mental wellbeing.  The defenders were trained on key wellbeing strategies; for instance, the debriefing and the do-no-harm methodologies, to ensure that their ongoing efforts are not a form of trauma extraction and multiplication.

Despite the various issues facing the African environmental defenders, there was a resounding voice of “aluta continua”. 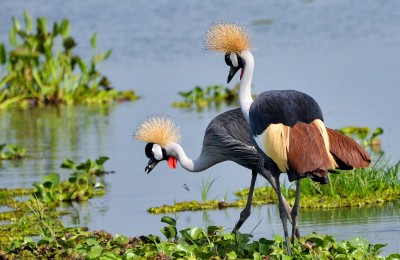 Statement on Arrest of our Uganda Partners – AFIEGO Staff