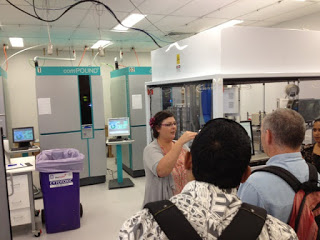 From 19-22 November, 2012, the first ever since Oceania Biodiscovery Forum took place in Brisbane, Australia. The meeting was jointly facilitated by the Secretariat of the Pacific Regional Environment Programme (SPREP), the Eskitis Institute of Griffith University, the Australian Department of Sustainability, Environment, Water, Population and Communities (SEWPaC) and the ABS Capacity Development Initiative. This meeting was followed by an Access and Benefit Sharing (ABS)  capacity development workshop for ABS Focal Points and other relevant stakeholders in the Pacific region from 22-23 November.

The Biodiscovery Forum provided a platform for exchange on the nature of bioprospecting activities by Australian research institutes, both public and private. A number of researchers shared the nature of their work, ranging from small-scale commercial bioprospecting activities to large-scale gene banks of marine genetic resources. These activities were then discussed against the backdrop of the Nagoya Protocol on Access and Benefit Sharing to the Convention on Biological Diversity and Australia’s draft policy as a user of genetic resources as well as the existing permit system as a provider of genetic resources. A number of national and regional benefit sharing examples with local communities were shared with participants.

Both the European Commission and Switzerland shared their current status in implementing the Nagoya Protocol as users of genetic resources, and the extent to which genetic resources would be protected once they left their country of origin. This led to substantial debate as some participants were not satisfied with the current interpretation of both Switzerland and the European Commission in relation to the temporal scope of the Nagoya Protocol as well as their definition of what constitutes ‘access’. In their view the current wording would result in too many resources currently in gene banks being excluded from the Protocol’s protection and subsequently undermine the very purpose of the Protocol.

Finally, the Biodiscovery Forum ended with a visit to the Eskitis Institute, which houses a wealth of terrestrial and marine compounds to support the Institute’s search for novel drug- and cell-based therapies against cancer, infectious diseases and neurological diseases.

The ABS Capacity Development Workshop, the third of a series of three regional workshops in 2012, targeted ABS Focal Points and other relevant stakeholders from the Pacific region. Representatives from the Cook Islands, Fiji, the Solomon Islands, Papua New Guinea, Niue, Kiribati, the Federation of States of Micronesia, Marshall Islands, Samao, Palau, Nauru, Tonga, Vanuatu as well as the overseas territories of American Samoa and New Caledonia participated . Also invited were representatives from South Africa and Jamaica to facilitate further South-South exchanges.

At the request of participants from previous workshops, this training focused on Prior Informed Consent and Mutually Agreed Terms as the two key elements of implementing ABS. Johanna von Braun from Natural Justice served as one of the key resource people in the workshop together with Daniel Robinson (University of New South Wales), Morten Tvedt (Fridtjof Nansen Institute), Geoff Burton (United Nations University), Ben Phillips (SEWPaC), Clark Peteru (SPREP) as well as Andreas Drews and Susanne Heitmueller from the ABS Capacity Building Initiative. Further presentations included a presentation of Locally Managed Marine Areas (LMMAs) as relevant community governance structures for ABS by Alifereti Tawake and a presentation on relevant funding opportunities by the GEF Small Grants Programme.