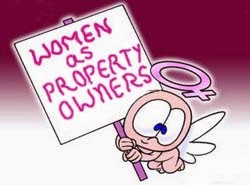 In India, women’s access and rights of ownership over family property (both moveable and immoveable), in the absence of a will, is governed by succession laws based on religion. Under Hindu law prior to 1937, a woman did not have the right to own any property at all, except what she received from her parents at the time of her wedding. The Hindu Succession Act, 1956 was a breakthrough in terms of giving Hindu women a full and equal share of their husbands’ property as the children; yet, the male bias persisted. An amendment to this Act in 2005 took the progressive step of making daughters coparceners at par with sons, such that they receive an equal birthright to a share in the natal family’s ancestral property, i.e., parents’ property.
In December 2013, International Land Coalition (ILC) member Landesa Rural Development Institute and UN Women, India, prepared a report on the formal and informal barriers in the implementation of the Hindu Succession (Amendment) Act, 2005 in the context of women agricultural producers of Andhra Pradesh, Bihar and Madhya Pradesh. The study is unique in a number of ways, especially given its focus on women as agricultural labourers, an explicit effort to ask women what they want, and an assessment of the overall awareness of all stakeholders on general awareness relating to this law.
Unfortunately, the studies conducted reveal several barriers to the implementation of the law. There are several formal barriers, such as continuing male bias in the law itself despite the amendments; for example, the devolution of a woman’s property still remains biased towards her husband’s heirs against her natal family. Further, Hindu women continue to be deprived of their inheritance through wills.
Additionally, there are informal barriers as well, in the form of social and cultural barriers. Women are generally forced to give up their share of their parents’ property in favor of their brothers for various reasons, such as the fear of breaking familial bonds. In traditional patriarchal societies, such as Haryana, local authorities brazenly deprive girls of their legal right to ancestral property.
The surveys conducted revealed number of key insights, suggesting that many women have yet to benefit from the legal changes introduced by the 2005 Amendment. The report notes that:

In contrast, a study done by FAO in Madhya Pradesh and Bihar identified certain trends in women’s land rights in tribal communities. Unlike the majority Hindus, tribal women do not have inheritance rights to land under customary law among most settled tribes. However, various social arrangements and practices have existed to provide adequate care to women in situations of widowhood, breakdown of marriage, single women and for families having only daughters.