ICCAs and the Rights of Indigenous Peoples 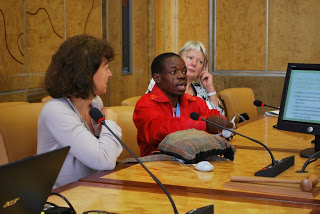 On 15 July, the final day of the 4th Session of the Expert Mechanism on the Rights of Indigenous Peoples (EMRIP), Natural Justice and the ICCA Consortium co-hosted a side event entitled, “Community Governance and Stewardship of Traditional Territories and Biocultural Diversity”.

Grazia Borrini-Feyerabend introduced and provided many examples of Indigenous peoples’ conserved territories and community conserved areas (commonly known as ICCAs), illustrating their diversity of forms, motivations, values, locations, and impacts. She highlighted their worldwide significance as locally specific “meeting points” of conservation and sustainable livelihoods, rooted in biological and cultural diversity and adaptive decision-making and management systems. Acknowledging the wide range of threats and challenges, she also noted the growing recognition of ICCAs in international policy, particularly in the Convention on Biological Diversity’s Programme of Work on Protected Areas (PoWPA) and the United Nations Declaration on the Rights of Indigenous Peoples (UNDRIP).

Eleanor Goroh (Jaringan Orang Asal SeMalaysia) spoke about government recognition of the customary fishing system (tagal) in Sabah, Malaysia. Tagal is still being used by some communities in Sabah and has been revitalized in others, with the aims of environmental sustainability and economic self-sufficiency. Such Indigenous natural resource management systems are closely linked with other social, cultural, economic, health, and knowledge systems; they are rooted in and transmitted through generations of learned experience and adat (customary law). Partly in response to declining use since the 1960s (due to logging, uncontrolled fishing practices, and overall exploitation of riverine ecosystems), the Sabah Fisheries Department has recently institutionalized and promoted the tagal system, in accordance with Sections 35-37 of the Inland Fisheries and Aquaculture Enactment 2003. Although this legal recognition is an important turning point for the inclusion of Indigenous knowledge in conservation efforts in Sabah, it also requires the creation of new committees, standardized rules, and compliance mechanisms that do not accord with the traditional systems. Goroh noted that Fisheries Department should respect and recognize the localized customary governance and legal systems that tagal was built upon rather than replacing them with state-determined and standardized arrangements. She also called for such recognition of customary resource governance and management systems amongst the other state departments and enactments, particularly protected areas. 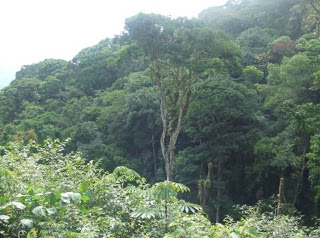 Diel Mochire (Programme d’Intégration et de Développement du Peuple Pygmée au Kivu/Shirika la Bambuti) presented on Indigenous peoples and forest conservation initiatives in the Democratic Republic of the Congo. Mochire’s organization works to support the human rights and socio-economic and cultural development of the Indigenous Pygmies, as well as the protection of the forests, natural resources, and endangered species in their traditional territories. He noted that while different members of the community may have different approaches or motivations for conserving their territory, they are all working towards the same shared vision, namely, political, cultural, and economic autonomy. However, they also face many challenges, including conflicts between customary law and state law, displacement for the creation of strictly protected national parks, lack of respect for the right to free, prior and informed consent prior to activities taking place on their lands, and effects of climate change and land use change (which are in turn driven by industrial logging and agriculture). He called for reinforcement of participatory and community-driven decision-making for conservation initiatives, recognition of customary forest management systems, culturally appropriate education, and greater awareness-raising and capacity-building around the impacts of climate change and potential for REDD schemes.

Vita de Waal (Foundation for Gaia and IUCN-CSVPA) spoke about sacred sites and their role in conserving areas and landscapes. Sacred sites are found in a wide range of places, including pilgrimage routes, particular trees, rocks and stones, sources of water, forests, valleys, mountains, and even entire cities. Some are well-known, and others are secret or hidden, only known locally. She emphasized that sacred sites are some of the most important sites of all of humanity and they often are protected and conserved through sophisticated customary governance and management systems.

Holly Shrumm (Natural Justice) closed the panel by reiterating the centrality of self-determination, self-governance, and customary law, as well as the place-specific inter-linkages between biological, cultural, and linguistic diversity, to the localized conservation of territories and areas. There is a diverse bundle of individual and collective rights under both international environmental and human rights frameworks that could support ICCAs in practice, but many obstacles remain and significant human rights violations continue. It was suggested that one way to realize both environmental and human rights frameworks is to conceptualize, implement, and build movements around them together. Four key sets of rights that are fundamental to community governance of territories and biocultural diversity include: rights to self-determination and autonomy; rights to ownership, control, management, and use of land and natural resources; rights to culture, including cultural integrity and participation in cultural life; and rights to self-governance and participation in decision-making. Suggested next steps include developing guidelines for appropriate recognition of and support for ICCAs; advocating for appropriate legal recognition of Indigenous peoples’ fundamental rights (as above) in different international and domestic fora; utilization of existing reporting and grievance mechanisms; and mobilizing local movements and public awareness campaigns to garner broad support. (For more information, see Stevens, Stan (2010). “Implementing UNDRIP and International Human Rights Law through Recognition of ICCAs.” IUCN-CEESP Policy matters 17: 181-194.)

Discussion included the centrality of these issues to the fundamental rights of Indigenous peoples and local communities around the world; the need for economic and legal systems to be rooted in principles of the natural world and ecosystems; the need to seek and act upon synergies between the different international frameworks; supporting capacity-building initiatives at all levels (including information and resources); the challenges of structural barriers such as illiteracy and power imbalances; opportunities for expanding the mandate and influence of people such as the Special Rapporteur; the power of demonstrating community capacity to conserve as a strategy for government recognition and support; and challenges with realizing the right to free, prior and informed consent (particularly when instigated by powerful corporations and governments).