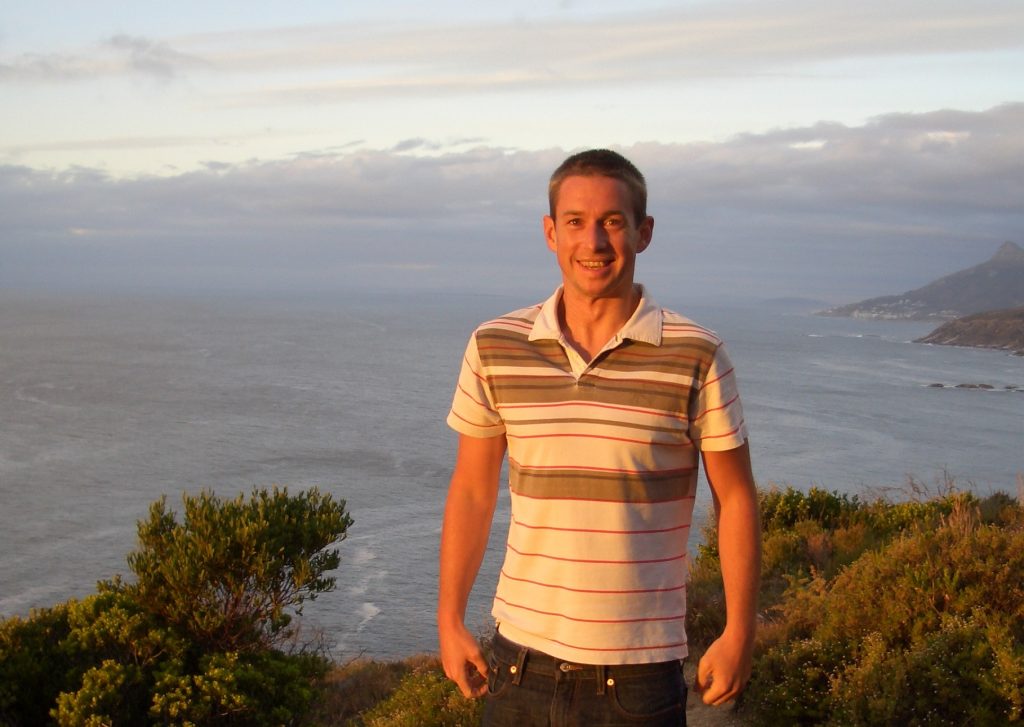 Pooven Moodley (Natural Justice’s Executive Director) sat down with Harry Jonas at the UN Biodiversity Conference in Egypt to discuss his leaving. This is what they had to say.

Pooven: So, this is it, Harry. Twelve years after founding Natural Justice you’re leaving. How does it feel?

Harry [Chucking while feigning the wiping away of tears]: Actually, it feels just right.

Pooven: Let’s go back, how did it start?

Harry: It was a meeting of hearts and minds. I met Sanjay Kabir Bavikatte in late-2006. He had experience of local lawyering in India and I’d come from an international law background. We were instant friends and were intrigued by each other’s worlds. We drank a lot of coffee, talked incessantly and thought about what it all meant for lawyering at the nexus of social and environmental systems. It’s fitting that he went on to do important things at the international level and I’ve had some of my most rewarding experiences working with communities in South Africa, India and now Malaysia.

Pooven: Why did you start the organization?

Harry: Let’s just say that we both found ourselves underemployed in Cape Town in January 2007. We had the option of going our separate ways, but despite having only known each other for a couple of months, we had a strong sense that a future journey was emerging. Within a few days, fuelled by more strong coffees on Long Street, we developed the organization’s operating framework.

Harry: We wanted to use law to support a fairer world; for people and nature. People naturally equate law with justice. Fair enough, but especially regarding land, natural resources and traditional knowledge in a great many countries, the law does the opposite – it locks in power asymmetries and perpetuates injustices. The even harsher truth is that it was designed to do that. So, we established Natural Justice to become a group of lawyers and paralegals who use the law to address active injustices, as well as to create frameworks that generate positive relations and outcomes.

Harry: It took us a few days. We thought through a range of options but, when ‘Natural Justice’ came up, we knew it was the one. Natural justice is a legal principle relating to procedural fairness – being the indispensable condition of all forms of substantive justice. And, of course, the words themselves evoked our core vision – social and ecological justice.

Pooven: Right. On that note, you lived in Upington in northern South Africa for two years. Tell me about that.

Harry: I moved from Cape Town to work alongside Khomani San communities living in the south of the Kalahari Desert. That’s when I saw, in its starkest possible terms, what deeply ingrained racism and marginalization looks like. When I arrived I was told by one of the first [white] people I met that the town was a ‘nice little piece of apartheid’ – this was in 2008, 14 years after President Mandela’s election. As despicable a character as he as, he was right. It makes me feel sick to think about how little it has changed since then. But I also had the privilege to see the resilience and tenacity of the San community leaders. I was very kindly taken in by the Festus family – twelve brothers and sisters – many of whom are doing important things in education, health and cultural revitalization within their communities. Those years were among my most expansive times and I’m forever grateful for their kindness.

Pooven: That’s the time the organization was co-developing the idea of community protocols?

Harry: It was. A human rights lawyer, Brendan Tobin, told us about community protocols developed by Indigenous Peoples and local communities to regulate access by outsiders to their traditional knowledge and genetic resources. These were often relatively short documents, one or two pages of bullet points. At around the same time we learnt about community development plans, referred to as ‘planes de vida’ [‘Life plans’] in Latin America, which are more comprehensive documents developed to guide the community’s internal growth. Through further discussions with a wide range of helpful people, we blended the approaches to develop a process that integrated social mobilization with legal empowerment.

At that time, we felt that all our local-level work should always break the dichotomy of the community being spoken to or spoken for. Every protocol that Natural Justice has supported communities to develop since then is founded on that basis.

Pooven: Since those early days, the organization has grown a lot. As you look back, is there anything about which you are particularly proud?

Harry: It has to be the team. The other day I was joking with Lesle [Jansen – Programme Director of the Governance of Land and Natural Resources Programme] that perhaps the real achievement of founding Natural Justice is simply this: we established a platform that dedicated lawyers and paralegals have been able to use to support fellow Africans’ flourishing – fighting injustice and using the law imaginatively to create new, socially and ecologically just paradigms.

When Kabir and I started out, there is no way we thought that within a decade there would be 30 people working on land, natural resources, climate change, infrastructure projects, extractive industries and conservation. The people who joined have all engaged wholeheartedly – committed to the wave – and built their programmes and established new hubs. Through their tenacity, we are joining in solidarity with a wide range of other organizations and movements committed to bending the moral arc. I’m deeply proud of the team’s work.

Harry: So, on that note, let me ask you a question.

Harry: My last act of insubordination! You’ve just become Executive Director – congratulations. Why did you take on the role? I know you had a range of opportunities but you chose Natural Justice. Are you mad?

Pooven: Only slightly mad [humming Queen’s ‘I am going slightly mad’]. Einstein once said ‘We cannot solve our problems with the same thinking we used when we created them’. Before joining Natural Justice, I was working with a group of activists to stop a massively corrupt nuclear deal between South Africa and Russia. This was the biggest deal as part of a captured South Africa state, while one-in-four people go to bed hungry in South Africa. It seemed impossible to stop but, through the courts and people power, the deal was stopped.

It was time to move to the next battle we are dealing with globally. It is a battle to survive based on the most recent climate science reports and the WWF report confirming that we have wiped out 60% of animal populations since the year I was born. I decided to join Natural Justice because it is well-placed in its work with Indigenous Peoples and local communities to support local struggles that ultimately have a global impact. Every victory for communities against the violation of human rights and the destruction of the planet, is a victory for people and the planet.

Harry: And what do you see as Natural Justice’s core future contribution, say from 2020 to 2030?

It’s a good question and something that has been crystalizing here [at the UN Biodiversity Conference]. The next decade is critical for Africa. The current high levels of inequality, economic poverty and unemployment are not sustainable. It is clear that the current model of economics serves few people while the majority fights for the crumbs based on the ongoing system of slave labour. At the same time, while multinationals buy up large tracts of land, either for unsustainable monoculture or to exploit the mineral, oil and gas resources, the majority of people in Africa do not have any form of secure land tenure.

Natural Justice has a key role to play, together with communities, to challenge injustices through legal empowerment, litigation and campaigning with others for alternatives to the current development paradigm. Recent court victories show that these partnerships can and will work. In South Africa, ‘free and prior informed consent’ has stopped harmful mining on the Wild Coast. The Ogiek people remain in their forest in Kenya through the decision from the African Court on Human and Peoples Rights and the Lamu Port peoples’ victory provides a turning point.

As a collective, and working with communities and other civil society organisations and movements in Africa, Natural Justice can play a key role in turning the tide, combining social justice, human rights and the environment. So, working for an African organization dealing with the law, human rights, Indigenous Peoples and local communities and the environment feels perfect. I feel energized and at home!

The organization went through a few phases of development in the past 12 years, but perhaps they all fall within one broader epoch: growing roots. I’m sure if NJ continues to be a place that welcomes keen legal minds and gives them the right balance of freedom and support, it will continue to make a positive difference.

Pooven: Ditto. Now, my last question: any thanks?

Harry: Yes, so many people to mention. I guess I’ll answer it this way. My country, the UK, had devastating and systemic impacts in a high number of countries throughout the world, including in Africa. When I meet people from Indigenous or local community backgrounds, I am acutely aware of the historical and ongoing injustices. I always approach new acquaintances and situations by listening very carefully to their stories: ask questions, listen, reflect; the rest follows.

I read this quote once, by Lilla Watson, and it sums up how I’ve felt about my work from day one: If you have come here to help me you are wasting your time, but if you have come because your liberation is bound up with mine, then let us work together.

And we set up Natural Justice to do just that: to champion causes with which we are viscerally involved. I’m grateful for the many people who have given us their insights – sometimes over long evenings, sometimes tidbits in the corridors of UN meetings. However it works out, the ideas are always deeply considered and acted upon. To mention a few Indigenous and community friends and colleagues who have shown great generosity to us in this regard, I’d include Andries Steenkamp, Rodney Sibuye, Taghi Farvar – all three of whom have sadly now passed away – Anna Festus and her family, Barbara Wilson, Emma Lee, Eli Enns, Chrissy Grant, Joji Carino, Alejandro Argumedo, Vicky Tauli Corpuz and her daughter Jennifer, and now the Lasimbang family and Cynthia Ong in Sabah – who are teaching me a lot about living with an open mind, open heart and open will.

I’m also hugely grateful to Johanna [von Braun] who was the first person to join the organisation and to all our board members over the years, particularly our first two – Adele Wildschut and Hennie van Vuuren – who saw us through our early years. Wonderful individuals. And of course my darling wife Holly – who I met in the Kalahari – and my family and friends, who’ve been very supportive since the beginning.

[Pooven] From everyone on the team, thanks for your time, Harry.

Harry: Hah! To reference Rodriguez: “And you can thank me for mine”. Shall we sing along?

Pooven Moodley is the Executive Director of Natural Justice. 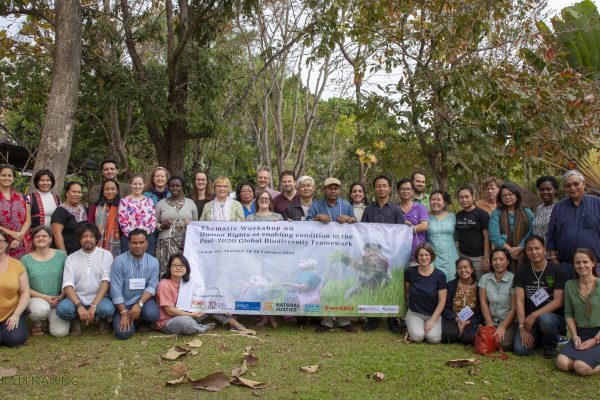 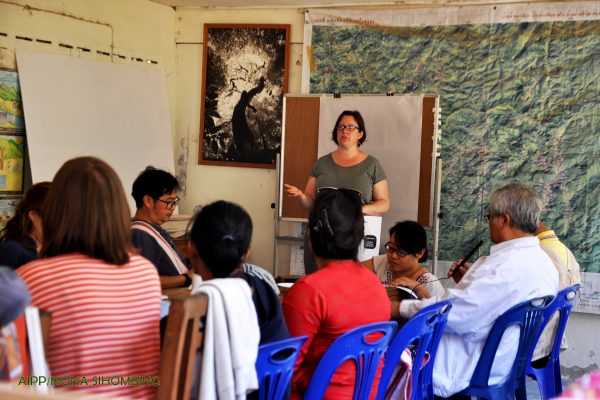 Human Rights and Biodiversity are not mutually exclusive: They depend on each other
STAY CONNECTED! SIGN UP HERE >>.
POWERED BY THINKTEAM
We use cookies to ensure that we give you the best experience on our website. If you continue to use this site we will assume that you give your consent for this.OkRead more