First BCP in the Context of Ethical BioTrade 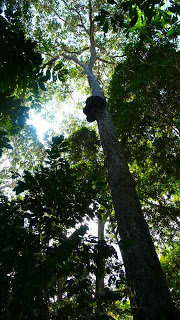 During the course of the last week, Johanna von Braun (Natural Justice) participated in the first of three pilot studies as part of a joint GIZ-funded project between the Union for Ethical BioTrade (UEBT) and Natural Justice. The aim of the project is to test the concepts and methodologies of biocultural community protocols (BCPs) as a tool to enhance engagement of local actors in Ethical BioTrade supply chains.

The pilot took place in Puerto Maldonado, a small town in the southern Peruvian Amazon. It focused on the relationship between Candela, a founding UEBT member, and the Asociación Forestal Indígena de Madrede Dios (AFIMAD), an association formed by seven local Indigenous communities, to promote their forest-based productive activities. The current commercial relationship between the communities/AFIMAD and Candela is based on the harvesting of the brazil nut (tree pictured at left); both parties are keen to expand their relationship to other products.

The development of the BCP by AFIMAD and the seven communities took place over several meetings and was supported by a local facilitator. It eventually included a broad number of issues that the communities wanted to tackle, ranging from illegal mining to the invasion of outsiders into their lands. Similar to other BCPs, it also included a section in which the communities explained who they are, how they are organized, what their values are in relation to their local ecosystem and resources, and their overall endogenous development objectives. Furthermore, a particular section of the BCP focused on how they want to relate to third parties in a commercial relationship, and what they see as their own commitments towards such relationships.

Because the aim of the BCP was to affirm the communities’ relationship to Candela, an additional component of the BCP process was a facilitated dialogue between the communities and the company. This entailed parties introducing themselves to each other based on their values, governance, communication, and decision-making structures. In the case of Candela, the values presented to the communities were the EthicalBioTrade principles, which highlighted that their anticipated relationship was more than a commercial relationship but a partnership towards economic, social, and environmental sustainability. In turn, the communities presented themselves to Candela based on the core elements identified in their BCP, namely those that related to the communities’ values, governance, and expectations from companies and their own commitments.

During this dialogue, in-depth discussion took place with respect to the concept of Ethical BioTrade and the different elements in the seven BioTrade principles. Both parties discussed internally and then with each other how they could contribute towards establishing a good working relationship based on the Ethical BioTrade principles through both general and specific commitments towards each other. The final part of the dialogue was the identification and ‘Agreement of Principles’ such as transparency, dialogue, trust, good faith, and a commitment towards further discussion of what to do if these commitments are not met (i.e. conflict resolution) and what constitutes a ‘fair price’. In the end, both parties walked away from the dialogue with a draft Agreement of Principles and Commitments. The communities had also drafted a BCP in the process, which they aim to develop further in the near future.

After an evaluation session, both AFIMAD and Candela were pleased with the outcome of the process. AFIMAD further valued having developed a BCP that could be applicable more generally. From the Candela and UEBT perspective, it was an interesting opportunity to explore methodologies that, based on the BCP approach, can be used to promote a stronger engagement with communities from which they obtain their natural resources.

Two further pilot studies in Brazil and Madagascar are planned this year in the context of Ethical BioTrade, after which the lessons learnt will be discussed in a review meeting in Cape Town in early 2012.