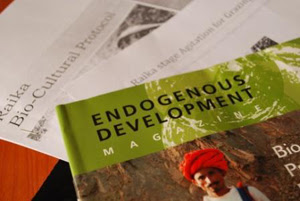 In the evening of October 26, Natural Justice hosted a side event on biocultural community protocols and the links with endogenous development and wellbeing. Other hosting organizations included COMPAS, UNU-IAS, UNEP, and UNDP. Harry Jonas (Natural Justice) provided an overview of the different approaches in reference to community-level pressures and the rights to self-determination and to provide free, prior and informed consent.

Alejandro Argumedo (Asociacion ANDES, Peru) spoke about Indigenous territories as complex, adaptive biocultural systems that serve as an alternative to the current neo-liberal capitalist and conservation paradigms. He described the Potato Park inter-community benefit-sharing agreement, which is based on customary Quechua principles of reciprocity, equilibrium, and duality, as an articulation of how Indigenous peoples conserve and sustainably use biodiversity, protection against biopiracy, securing of rights to traditional knowledge and natural resources, and a process of community empowerment, maintenance of culture and introduction, and collective thinking about new issues emerging from legal frameworks.

Dr. Merlin Franco (Centre for Indigenous Knowledge Systems, India) described the biocultural community protocol of the Sirkhazi Organic Farmers’ Association of Tamil Nadu, which asserts rights over 21 traditional rice varieties conserved through customary institutions and practices, as a process of internal reflection, documentation, self-commitment, and government lobbying. The development of the protocol, which is still ongoing, has so far helped revitalize local interest and practices related to this agrobiodiversity and aims to gain legal recognition for their conservation of agrobiodiversity heritage and prevent the spread of genetically modified crops through Indian legislation such as the 2002 Biological Diversity Act.

Nahid Naghizadeh (CENESTA, Iran) illustrated the activities of 12 Tribal Confederacies and Tribes in Iran, each of which is developing a community biocultural diversity register in their Indigenous mobile pastoralist territories. She narrated over a video that showed the tribes’ collection and documentation of wild flora throughout their territories in each of the four seasons, noting that the traditional knowledge and practices must be revived and used by the communities themselves. The biocultural diversity registers will contribute to community protocols over the next couple of years, which will be used towards the development of bottom-up national law and policy on access and benefit sharing (ABS).

Barbara Lassen (GTZ) spoke about the importance of further developing and refining the concept and applications of community protocols, particularly considering their role in the draft international protocol on ABS. She noted that if the ABS protocol is adopted here in Nagoya, Parties to the Convention on Biological Diversity will be obliged to legally recognize community protocols, presenting another opportunity for the imposition of top-down standards and institutions. 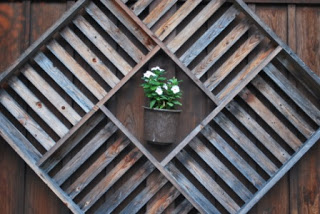 Balakrishna Pisupati (UNEP) cautioned that since biocultural community protocols are so context-specific and diverse themselves, their collective impact may be greatly improved if they adhere to some sort of standards or guidelines.

Terence Hay-Edie (GEF Small Grants Programme) observed that biocultural community protocols are becoming a sort of branded term in themselves and noted that protocols should aim to help transmit – not just protect – biocultural systems through a variety of approaches.

Discussion ranged from acknowledging that the development and use of community protocols are still in their early stages; that guidelines will be very difficult to establish if communities are to define their protocols for themselves; that the strength of protocols is in their diversity and support for customary laws and legal pluralism; that protocols are value-laden tools, are about both process and outcome, and should be ongoing and increasingly inclusive of different members of the community; and that endogenous development processes are critical, and protocols should be seen as flexible tools towards strengthening rights, responsibilities, livelihoods, and biocultural systems.

Holly Shrumm (Natural Justice) closed the side event by noting that community protocols are part of a wider process of democratization and decentralization of collective rights and responsibilities to the local level, which is not about extracting derivatives or components of knowledge, but about supporting entire biocultural relationships and systems. Natural Justice thanks everyone for their support and ongoing collaboration and feedback.