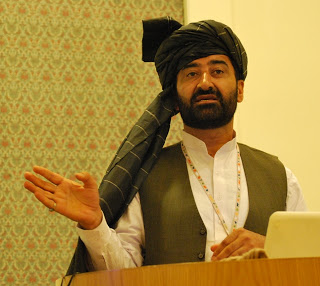 On 20 July, at the 13th Session of the UN Food and Agriculture Organization (FAO) Commission on Genetic Resources for Food and Agriculture (CGRFA13), the LIFE Network and the League for Pastoral Peoples and Endogenous Livestock Development co-hosted a side event on  biocultural community protocols, traditional livestock keepers, and animal genetic resources.

Paul Boettcher (FAO) introduced the linkages between the Global Plan of Action for Animal Genetic Resources, the Nagoya Protocol, and the Convention on Biological Diversity, noting that a common element is recognition of the traditional knowledge and cultural expressions of livestock keepers. He also acknowledged that animal genetic resources are the direct result of generations of livestock keepers’ livelihoods and that biocultural community protocols provide an opportunity to raise the profile and awareness of livestock keepers at all levels.

Abdul Raziq Kakar (Society of Animal, Veterinary and Environmental Scientists) described the biocultural community protocol that the Pashtoon of Balochistan (Pakistan) have developed as “the mirror of the community”; it includes information about their history and culture, genetic assets, customary law and management systems, habitat, and future and hopes. The process of developing the protocol included community consultations, door-to-door visits, meetings with elders, soliciting of experts’ views and inputs, and further community meetings. He noted that the protocol has helped identify two indigenous breeds that had never been recognized by the government and helped unify the community under “one voice” to advocate the government for change.Jacob Wanyama (Africa LIFE Network) noted that despite growing international interest in the conservation of animal genetic resources, there is little recognition of the role of livestock keepers as custodians of indigenous livestock breeds at the national and local levels. He lamented the dilution and potential extinction of indigenous breeds in Kenya, particularly the Red Maasai sheep, due to environmental and socio-economic factors such as increasingly irregular droughts and the introduction of exotic breeds. The biocultural community protocol that the Samburu of northern Kenya developed has contributed to increased local awareness of issues affecting livestock keepers and their breeds; consideration of plans for continuing their role as custodians; and clarifying terms and conditions for engaging with outsiders such as policy-makers and researchers.

Hanwant Singh Rathore (Lokhit Pashu Palak Sansthan) provided an overview of the local context of the Raika in Rajasthan, India, including their dependence on access to common property resources for grazing and the as yet lack of implementation of the Forest Rights Act 2006 for livestock keepers. He also illustrated the many opportunities for developing natural products of indigenous camel breeds in Rajasthan into marketable items such as dung paper, wool shawls, ice cream, and soap, highlighting the importance of such incentives for retaining interest amongst the community members in livestock keeping amidst pressures to migrate to urban areas.

Ilse Köhler-Rollefson (League for Pastoral Peoples) explained that biocultural community protocols can help establish community ownership over traditional breeds and associated grazing areas, as well as clarify to policy makers and researchers the direct linkages between animal genetic resources and local socio-cultural contexts. She noted that any access and benefit sharing agreements should focus on in situ conservation and sustainable use and contribute to communities’ endogenous development. She emphasized that adapted livestock breeds are “ecological treasures” whose economic value will become more apparent in the future, and that communities who are actively conserving them should be supported to continue to do so in situ.

Questions from the audience stimulated discussion around issues such as culturally sensitive participation in the development of biocultural community protocols; opportunities for legal recognition of protocols; conditions within which local production systems can be sustained, including capacity building; and wider issues of land and access rights as the foundation for sustaining the breeds.

Daily summaries and online coverage of the CGRFA13 negotiations is provided by the International Institute for Sustainable Development Reporting Services (IISD-RS).